Johnny Brady pioneers the car wash of the future at Coolquay

Forecourt owner Johnny Brady has seen the future of car washes – and it’s not unlike a beauty salon!

As he unveiled his brand new forecourt and facilities at Coolquay near Ashbourne, he revealed how this was the first of his three forecourts to feature the whole new drive-through tunnel system.

“What’s different is the vacuum facilities after the car wash – which gives the motorist time and space. There’s no timer although we reckon 15 minutes enables a full, deep vacuum,” he says.

The extensive tunnel car wash features 16 spaces, meaning that even at the busiest times there is no backlog. 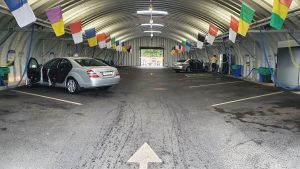 “It’s a fantastic system. The German made Christ Wash Systems are probably one of the biggest and best in the world for car washing,” Johnny says.

“It’#s a great company – I went out to visit a few times over the years and was so impressed by their innovation. It’s very customer focused.

“On entering the car wash, there’s an interactive screen – a tap on the screen opens two gates and from there it’s all controlled and sequenced.”

And it’s not just cars that get the full treatment at the newly rebuilt destination development in Ashbourne.

One highly innovative concept – and a brilliant idea for the forecourt – was the installation of a dog washing facility. 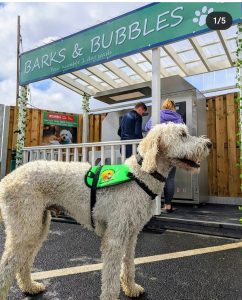 Anyone who owns dogs knows that washing them can be an arduous and very messy task at home and a carefree dog can leave the car in quite a mess following a country walk.

Called Barks & Bubbles, the system allows customers to have their pets pampered on site as well, with contactless ‘tap and pay’ dog washing facilities.