Heads in the Foodcloud

An inspiring pair of Irish social entrepreneurs have taken an idea, and turned it into a highly successful, ground-breaking social enterprise. FoodCloud is a charitable organisation that all forecourts and convenience retailers across the country need to know about.

A socially aware solution to all retailers’ food waste problems – yet it’s such a simple app-based solution.

Over one million tonnes of food waste is disposed of each year in Ireland, according to the Environmental Protection Agency (EPA). From the famine of the eighteenth century to the over-abundance of food waste in these modern times, this is a problem that needs a solution, from government policy level to every single business and household.

FoodCloud was launched in 2012 by Aoibheann O’Brien and Iseult Ward, while both were studying at Trinity College. They combined their education in economics, business, and environmental science when they met via a social enterprise start-up project. The idea was to eliminate food waste (as much as possible) by connecting businesses binning surplus food with charities desperately in need of it.

They spotted the need to connect charities to with food businesses directly, hence the FoodCloud food redistribution platform was born. A modern solution to a twenty first century problem, their elevator pitch says it in a nutshell: ‘FoodCloud is reducing food waste and food poverty and bringing communities together through shared food. It’s a young company being driven by an ambitious, visionary, entrepreneurial team. It wasn’t plain sailing from the get-go. There were hitches and glitches, and lessons to be learned. However, once the teething issues were solved, it was full steam ahead and in just seven years, FoodCloud has grasped and tackled the food waste issue head on – to the benefit of all involved. 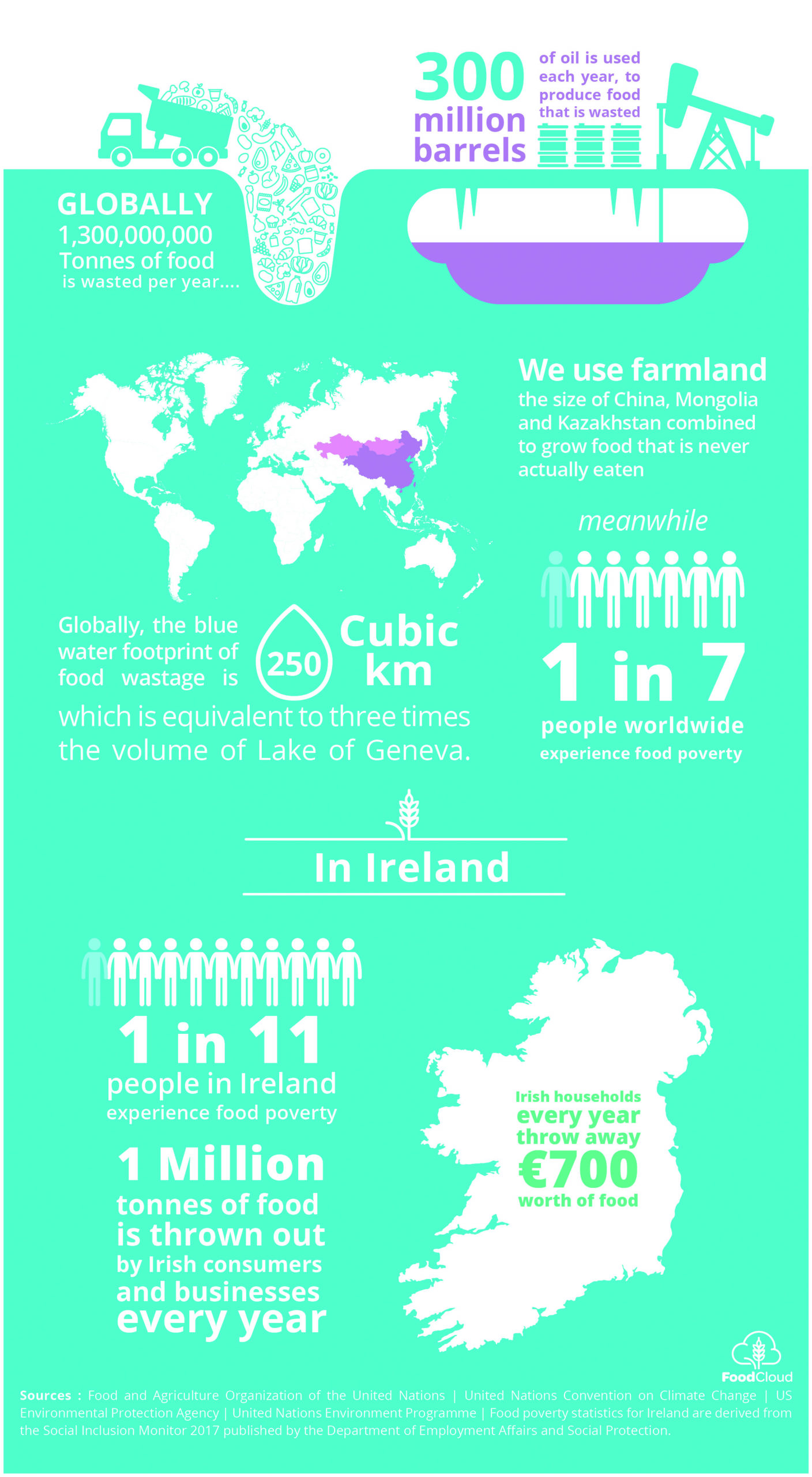 IF&CR spoke to FoodCloud’s head of operations Christopher Hill. “From being a start-up charity it has raced forward at a hundred miles per hour,” said Chris who first met Iseult and Aoibheann back in 2013. He was working in the operations department at Tesco’s Head Office in London at the time. A physics graduate from the University of St Andrews, Chris took the leap from studying quantum particle physics to helping Tesco find high tech solutions using data for forecasting food supplies and reducing waste. He was leading a team whose role was to optimise processes in store that would reduce food waste.

“Five or 10 years ago, food waste was somewhere else on the spreadsheet – but it became an obvious problem from a profitability point of view. When Iseult and Aoibheann first started out, the homelessness crisis was becoming an obvious problem in Dublin.

Following a successful trial with Tesco in Ireland in 2013, Tesco’s global CEO Dave Lewis spotted the platform being used in a store. He wanted to see it rolled out in all of Tesco’s 3,200 stores across the UK and Ireland. He brought FoodCloud to the UK, and the rest, as they say, is history – but a story with a brilliant future.

“FoodCloud now has a team of 53 staff, charitable status as it’s a not-for-profit business, working within the social enterprise model in Ireland,” explained Chris. We work closely with charities all over Ireland such as St Vincent de Paul and the Simon Community. Our work with charities needs to be of the highest standards.

FoodCloud uses its technology to connect stores with surplus food to local charities who will use it. Stores use the platform to update the local charity on what food items are available to them, the app then generates a text advising the charity that food is available for collection. The charity then confirms if they can come and collect at a designated time. If a charity can’t come and collect that day, the platform keeps looking until it finds one that can.

FoodCloud has three warehouse hubs in Dublin, Cork, and Galway. They work with retailers, manufacturers, and suppliers to identify where the surplus occurs. Any available surplus is re-distributed to charities. Internationally, FoodCloud also partner with other food banks. In the UK they partner with FareShare, the UK’s largest charity fighting hunger and food waste. They are also providing solutions in the Czech Republic, Poland and Slovakia, using technology to help other organisations grow their impact.

The charity works with over 650 charities across Ireland and 7,500 across the UK . “The charities range from breakfast clubs to homeless centres and addiction services. Many charities have been enabled to reduce their annual running costs by up to 30 per cent, and they get to procure all the food within its shelf life and ‘best before’ date,” said Chris.

“FoodCloud has big plans for 2020 and beyond. The plan is to grow, improve and develop more partnerships using technology, expertise and support from distributors. This includes extending the FoodCloud offering to support the forecourt and franchise model. Our aim is that no food goes to waste. We want to make Ireland a zero waste country by 2030, to fit with the UN’s target and sustainable development goal 12.3, which is to reduce food waste by half by 2030. We want to support the food industry in Ireland to be more sustainable. Consumers are becoming increasingly aware and making more noise. We want to support the Irish government to reach its goals. We need to do all we can to reduce food waste, reduce plastic packaging, reduce CO2 emissions – but in a carefully and considered way.

What would FoodCloud want retailers to take away from this interview?

“Understanding as much as we can about food waste is key. We all need to make decisions that will make a difference – specifically when it comes to food waste and the fruit and veg supply chain. Look at forecasting and ordering, fluctuating and accurately predicting demand, for the retailer and supply chain calculations. It is important that we look at how we can transform the problem of food waste into an opportunity. FoodCloud is an environmental and social enterprise, with a valuable business purpose. Ultimately, the benefit to retailers is that they have a more efficient operation.”

If you want to find out more about FoodCloud, visit: foodcloud.ie

Current EV support has to be retained: Brian Cooke