Elm Court Service Station in Co Limerick has paid tribute to quick-thinking staff members and motorists who prevented an explosion that could have devastated the  village.
The drama unfolded over the Christmas break when flames began to come out of a motorist’s car and she pulled into the Inver forecourt at Ballyneety to request a bucket of water.
As the car went up in flames, two staff members evacuated the shop and two passing motorists teamed up with garda to move the car away from the petrol pumps which were at risk of exploding.
The car exploded in a ball of flames, but fortunately no-one was hurt. 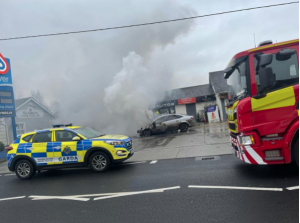 Afterwards, Elm Court Service Station paid tribute to the fast work of those who stepped in, posting on its Facebook page: “Well done to our staff members Anna and Adam and also to the brave men who moved the car. Wishing our customer a speedy recovery from the shock. There is still a lot of good in the world!!”
Proprietor Aideen Fitzpatrick said the motorist had stopped after flames began to come out of the car, but unfortunately  pulled in practically on top of the fuel pumps.
She told the Limerick Leader: “I think she thought it wasn’t too bad. She came in looking for a bucket of water to put it out but while she came into the shop it took off more. Thankfully, my two young part-time staff – Anna O’Connell and Adam Stapleton – immediately decided to get everyone out of the shop and rang the fire brigade straight away. They were brilliant.”
A garda on patrol in Ballyneety and two passing motorists also stepped in, opening the driver’s door and taking off the handbrake to push the blazing vehicle away from the pumps before it exploded, she said.
“It was very brave. They saw the potential of the whole village going up in flames,” Aideen said.
She also thanked Limerick Fire and Rescue Service and local garda, Graham O’Connell, for responding so quickly and dealing with the situation.
“The most important thing is nobody was hurt,” Aideen said.