EUROSPAR Millisle has a reason to smile following £3m investment

2020 may go down as one of the most miserable years in history, but for the small County Down seaside town of Millisle, there is one big reason to smile.

With a £3 million investment in a superb EUROSPAR, a range of new services and convenience retailing has been brought right in to the heart of a local community.

The build, which began pre-lockdown and lasted eight months, replaces the original SPAR store on Main Street, retaining its 15 employees.

NR spoke to Henderson Retail’s regional manager John Clarke about the new store – what was involved from start to finish?

“Millisle is a small seaside town so this is important for the local economy. It has been so well received by customers, especially in these challenging times . Shoppers used to have to travel to Ards, Donaghadee, or Bangor – now they have this great new facility on their door step.”

There was a local SPAR on the Main Street which continued trading right up until 8pm the night before the new EUROSPAR opened. “Shoppers still want to be able to get their essentials locally,” explained John.

Then on the Friday morning in early September the doors were officially opened – with a guest of honour from the local community – Linda Patterson the retired principal of Millisle primary school who had been head mistress for 35 years and basically knows everyone in the community. 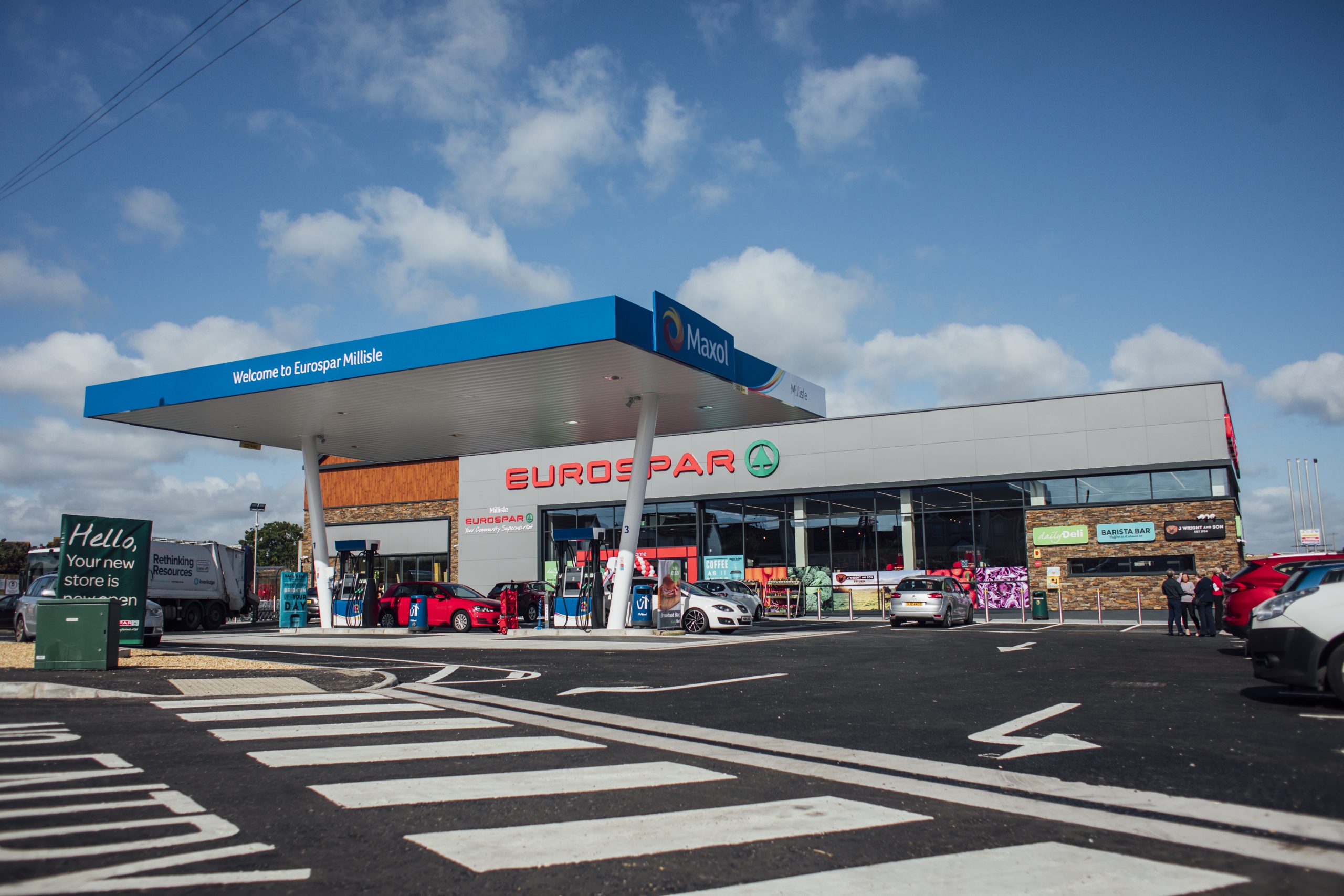 “It’s not just about design and creating a special store – it’s important to involve the whole community from the beginning. How we successfully deliver a great Community store is through our Project manager, Gregory Cochrane who will begin to build relationships within the community six to eight months before the store opens. During this time Gregory will begin to identify key community partners such as schools, community groups, churches and local clubs with whom we can work alongside, support and by working together make a difference in their local community.

Another key element of Gregory’s role is to work along with the store manager and existing staff to build the team structure for the new store. This is essential to deliver a successful project through its people and build ownership and accountability across each department within the store. With over thirty years of retail experience Gregory is uniquely qualified to deliver this role.

“This has turned out to be an invaluable role and has made a real difference to opening a new store for Henderson Retail. The new EUROSPAR has been so well received by the community,” said John

“IIt’s important the community is completely on board with everything that is happening. We see this as a key component to deliver a store that sits at the Heart of the Community.
Special store

The £3m investment in the EUROSPAR in Millisle was a huge project involving a number of departments within our team. The process starts long before work begins on site. This involved elements from our property team, acquisitions, operations and the technical side. Quite often that process starts 18 to 24 months beforehand.

“My role as regional manager is to check in and make sure everything is as it should be and all the key elements of the project are being delivered.

“The fixtures and fittings are important but the most important part is recruiting the right people so that from day one they know what they’re doing and they feel part of a great team.

“The existing 15 staff from the original SPAR on Main Street were retained and new staff brought in. They spent eight weeks training on customer experience, our tills, systems and how we do things. Everything is customer focused and designed to enhance the shopper experience.” 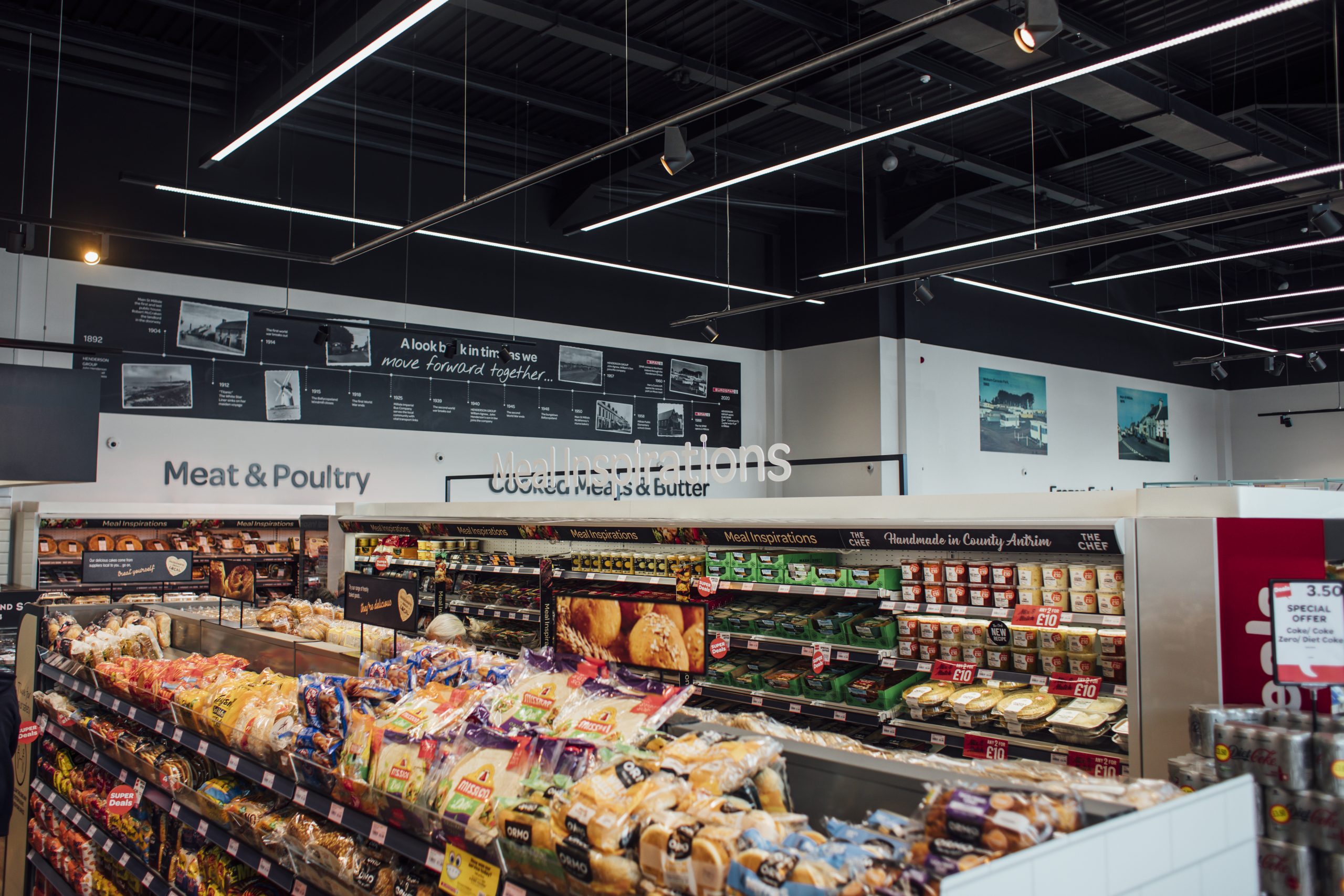 “The newness of the store – with its extended fresh range and family favourites is evident, but there’s also a brand-new butchery instore. Wrights of Donaghadee is a family owned butcher with 96 years’ experience and is very much steeped in the local community. People are delighted that they’ve opened a butchery counter in-store – this is the first time Wrights have opened a concession shop and it has been very warmly received by shoppers,” said John.

The new EUROSPAR also features the latest Barista Bar coffee machines, which can now offer deluxe size cups and favourites such as the Flat White.

“The latest version of our very successful Barista brand machines and is also much faster reducing the time from bean to. We know that saving time is important to our shoppers.

We have introduced three self-checkouts to improve speed of service but we also have manned tills for those who want to be served and engage with our team.

We’ve doubled the bread and cake space and there’s a lovely new Occasions area with Hallmark Cards, wrapping paper and everything you need for gifting”

They have introduced a new milk shake range which has proved to be very popular, as has the new deli counter – Daily Deli providing breakfast, lunch and tea time solutions.

The fuel forecourt is a welcome addition to the area.

“This is the first petrol station in Millisle for 15 years,” explained John.

“This is so important to the local community and economy. There’s also 39 parking spaces.”

With a total of 40 staff now – 15 original staff and 25 new staff working a mix of full time and part time, the EUROSPAR is an important local employer. It’s also a seaside town so there is a seasonal aspect to be factored in.

“It’s been open for over a month now. The feedback has been amazing. For example, on the till receipts there is an option for customers to ‘Tell Us First’ – for customer feedback.

“We are amazed that we’ve had 85 responses in the first month – 85 people took the trouble and time to go online to give us their feedback and it’s all been positive.

As regional manager, John Clarke oversees a total of 96 stores, with eight area managers looking after their respective areas. “I’m the link between the running of the stores and the directors” he explained.

In a small village like Millisle, this is a huge investment. It’s over 5,000 square feet and has been designed for the future.

“This EUROSPAR brings a butchery, deli, forecourt and a whole range of facilities on site. Our Tesco Price Match on over 1,000 lines means that we can offer customers great value at a more convenient location.”

Henderson Retail is constantly developing new and upgrading existing stores. As John Clarke spoke to NR, the company had just finished internal improvements at the SPAR BP forecourt on Malone Road in Belfast.

EUROSPAR Millisle is the second new store operated by Henderson Retail to open in the past couple of months after SPAR Carnmoney Hill.

The company will also open a new, state-of-the-art VIVOXTRA in Banbridge in November. The local supermarket will open on Newry Road, employing 40 staff and providing an array of local services from Windsor Bakery to Quail’s Butchery counter, with a high level of investment in the build for the local community.

“We’ll continue to invest in our local communities to bring great value shopping, top-quality services and amenities in a safe environment for our customers” said John.