The refurbishment of the existing site created eight jobs as the convenience store increased significantly to over 3,000 sq. ft., adding a brand-new hot food counter and Morelli’s Ice Cream bar.

Licensee Peter Robinson explains that the investment was in the pipeline for around 18 months as part of Maxol’s overall strategic plan to continue to meet the needs of its customers and creating a first-class customer experience.

“The site was performing well and had been ever since the last refurbishment in 2011,” he says. “We understood we needed more space than the existing shop could provide, so it was time for a change.”

Maxol has a partnership with the Henderson Group in Northern Ireland and so chose to update their deli to the newly refocused Spar Daily Deli that  offers a wide range of freshly prepared sandwiches, wraps, salads and nourish bowls, as well as both vegan and vegetarian options to suit the needs of all customers. Peter remarks the deli has a seen a huge surge in interest from regular and passing customers. 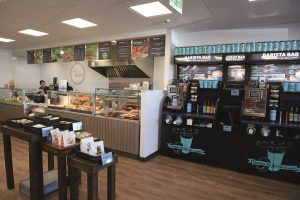 “We had a strong deli offering in there before that was very popular with our customers, but the bigger deli has allowed us to open up our rangeand offer a wider choice across both the hot and cold deli.

“The additional space in the store means that we are now full service and gives us the opportunity to extend our range and introduce new lines.”

Customers are responding well to the new fresh food offering with health being top of mind for many. Peter reveals that by extending fresh lines in store, Glenabbey Service Station now has a greater overall basket spend per customer.

“Fresh food; that’s where the growth is,” he says. “The fall out of the growth also extends to other areas as a result. Grocery and ambient, although slower, will move in tandem with your fresh food offering. So, if your fresh category is growing, you get the secondary purchases throughout the shop.

Any retailer will know that deli and coffee sales go hand-in-hand and Glenabbey Service Station is no exception. Although coffee sales have always been high, the site now sells in excess of 1,600 cups per week since the refurbishment. The addition of a local donut company has also played its part in driving up sales.

“Coffee is massive at this site and the two Barista Bar machines are pretty much nonstop. On the back of that I brought in Taboo Donuts which has proved to be extremely popular – even more than I thought they would be!”

Customers looking for a sweet treat will also enjoy the new Morelli’s scoop ice cream solution as well as the Tango Ice Blast machine. It is extra offerings like these that Peter believes makes the store a one-stop shop.

In addition to stocking a varied and relevant range of products in store, the site’s toilet and wash room facilities have been fully upgraded and the car park has been extended from 16 to 28 spaces to greatly improve access and convenience to customers.

“It’s a more encompassing shop now and we’re getting a lot of increased business, not just from the deli but we’re also getting fantastic evening and weekend trade,” says Peter.

“We’ve got the parking, the full range in store, the Maxol branded fuel offering – everything is sown up and perfectly convenient for all of our customers.”

There’s a large supermarket and forecourt close to Glenabbey Service Station but the ease of access brought about by Maxol’s investment means more customers are choosing top up shops in the Spar-branded store rather than navigating the busy multiple. 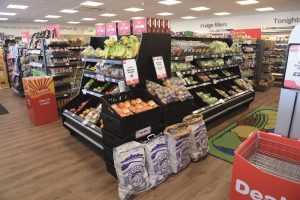 “A lot of people now do a top-up shop two or three times a week. Before in Glenabbey, we would have had a portion of that business but we were limited to what we could get due to parking. Now we’re ticking all the boxes and that’s what is showing in the customer feedback; they love the size of the shop and all the new ranges.”

Maxol’s reliable brand name above the canopy also plays its part in attracting customers to the site.

“We’re one of three filling stations in Glenabbey and yet we do incredibly strong fuel card and non-fuel card volumes. I put that down to the strength of the brand and the customer service you get from our staff; people recognise Maxol as an Irish brand and they know what they’re going to get.

“Maxol is a family-run business and I think you can see that in their values and the way they do business.”

After four years as a licensee with Maxol, when Peter acquired a forecourt in Crawfordsburn in April 2018 there was only one fuel network he trusted to help him launch his new venture.

“For me to have a foot in both camps – as a licensee and a dealer partner – I see how the business works from all angles, and although they’re very different models, I’ve built up a really good working relationship with the brand and know it works.

“Even down to how Maxol encourages each of its stores to be active in the community and to support local charities and get behind events; that is something you want from a company you are working with. They were a big part of organising the re-launch of Glenabbey and even CEO Brian Donaldson came down to officially open the store, which was super. That’s just the kind of thing you would expect from Maxol; they really give fuel retailing that personal touch,” says Peter.