Achieving buy-in – a personal investment of time, effort and good intention – is one of the strongest foundations any business can have.

Candy’s Carnew in Co Wicklow is as good an example of this as you may find, achieving buy-in on every level – from staffing to management and, importantly, among its customers.

Michael Kelly’s personal investment came in 2008, when he was invited to become part owner of the Gala site.

The site had been operating for two years at that time, with Michael – a Wexford native – as manager.

Telling Ireland’s Forecourt & Convenience Retailer about how he was approached by local businessman and owner Tom Doyle about the manager’s job in 2006, he said: “I was in the perfect place at the right time. I jumped at the chance.”

The Carnew business was owned by Tom and another local figure, and in 2006, the store had built up a solid trade.

“Since then, we’ve made an impressive improvement, and major step change increasing turnover fourfold.

In a small market town where three-storey buildings soar above the main street skyline, it’s an impressive feat, and one that has required experience to achieve.

“I came from a retail background,” Michael said. “So I wasn’t looking at the forecourt side of the business, I was treating it as a shop that happened to sell fuel. Our fuel and shop sales are quite unusual, it’s about a 50-50 split. Many retailers would find their split much higher in favour of fuel.

The Gala store has performed really strongly by playing to its strengths, adding a restaurant to extend the shop floor area, while the Gala bakery concept, Baker’s Corner, was also added.

“It was all part of my desire to make the store a destination, somewhere people would want to come,” he said. “It’s full of the smell of fresh bread, and things like that are important.”

As Michael’s passion for success drives the business forward, it  is his commitment to the role that truly  delivers that vital buy-in from customers.

The winter of 2009-2010, dubbed by some media outlets as ‘The Big Freeze’, would prove pivotal in the standing of Carnew’s Gala with the local community.

While snow fell in quantities of feet and not inches, many in Wicklow’s rural circumference found themselves barricaded by deep drifts.

Local stores too were cut off from deliveries, leaving the bakery at Candy’s Gala one of the only places where a loaf could still be found.

“We had the only bread in the whole of Carnew,” Michael said. “We were producing homemade brown bread for them, and making deliveries to those who were unable to get to the shop.”

Gala’s role in aiding the town with their daily bread during the white out has stood by them since.

Michael said: “Since then, the whole town has a taste for our homemade brown bread. It’s still really popular. Now, for that particular bread, we’d turn over about 75 loaves a week. The bakery and Baker’s Corner range has expanded ever since and our donuts are now really popular, as are our scones.”

That buy-in, stemming from Michael’s enthusiasm, has ultimately led to the high esteem in which the store is held.

“I like to think we’re more than just a convenience store,” he said. “We’re somewhere people come to get their essentials. We aim to have a high level of service, and products that are there when people need them.

“No matter what the customer is looking for, at any time, we try to get it for them. If they need help carrying their shopping, we’ll bring it out for them. If someone needs their basket carried around the store, we’ll try and get someone to do that. We don’t say ‘no’ to anybody.

“It’s those sorts of things that bring a customer back.”

Alongside healthy profits, the level of commitment to customers has brought the Wicklow Gala a range of awards, including a national retail management award in 2015, and a ‘Gold’ certification from Gala’s own B.E.ST awards.

A revamp at the start of this year has seen the store add a number of fresh ideas, and according to Michael, Gala has been involved in helping them develop these recent initiatives.

“We have worked really closely with the Gala team and our wholesaler Murphys. They have helped us develop our ideas, but what is great is that we can do it our way,” he said.

“Our store is modelled to perfectly suit our customers. Gala help you achieve what you want in your own vision, and every Gala shop is different. That’s what’s great about the partnership.”

Part of the remodelled store includes a new wine cellar, with plenty of advice on hand for those seeking a quality bottle of plonk. And using their customer intuition, the Carnew Gala has seen its wine sales grow by 85 per cent.

“It’s become a new destination for wine,” Michael said. “We’re encouraging our staff to gain knowledge about which wines go with what, and working with a local company to improve our expertise.”

Meanwhile, the bakery too has been given a lift.

“We’re really just complimenting what we had before,” Michael said.

If all that hasn’t yet secured the Carnew Gala as a customer-focussed store, Michael’s commitment to local life easily has. 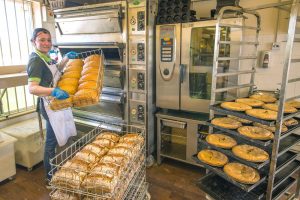 “I don’t believe in taking a wage out of the town and just heading home at the weekend,” Michael said. “I get involved with the local development association, and the town’s Christmas lights. We sponsor the local GAA, and Camogie teams, and I help organise the St Patrick’s Day events. Customers will see me in the afternoon in the shop, and then that evening at the local GAA pitch watching the match. People really do appreciate all that.”
Michael praised Gala’s sponsorship of the Ireland Special Olympics team, saying it demonstrated the brand’s commitment to local life and communities

Now, the Wexford man is planning on continuing the local store’s success, and is already looking at further improvements for the near future.

With managers as bought into the business as Michael, they’ll almost certainly be a success.