Brothers Conor and Dominic Doyle have just opened Doyle’s Grocers, a traditional, old world style grocers and artisan food shop in the heart of Ballymore Eustace in their home county of Kildare.

“The brothers were inspired by their grandfather, Dominic Doyle, who opened the first delicatessen in Ireland in the 1960s and who owned and ran the famous DB Doyle’s Butchers and meat processing plant in Newbridge, Co. Kildare.

Aside from being a successful food producer, Dominic Doyle Senior was a highly skilled businessman and was also the owner and one of the founders of the Newbridge Cutlery factory, now known as the world-famous lifestyle brand, Newbridge Silverware.

The new micro grocery store, Doyle’s Grocers, is housed in what was an old butcher’s shop in the square in Ballymore Eustace, and stocks a range of everything from cured meats to handmade cheeses, bread and cakes, fresh vegetables, speciality condiments, pickles, jams and preserves.

Original vintage dressers are filled with old fashioned tins of spices, unusual store cupboard luxuries and fabulous old-fashioned tins and packaging. The store offers everything from olive pâté, and chilli infused honey to traditional lemon curd and ‘blow your head off’ inferno hot sauce. The vintage inspired tin packaging containing premium picante tuna and anchovies is as pretty as it is tasty and is testament to the brothers’ quest for the unusual and the rare. 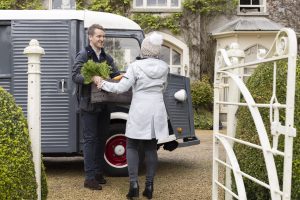 Local suppliers are key to the quality of the items for sale in the shop, which include local produce such as Bernard Gibney’s jams and preserves, handmade in small batches in Kildare Town. Cheeses include Ballyhubbock Farm Cheese and the most delicious, delicately fragrant, goat’s cheese made by Conor Phelan of Hollywood Farmhouse Cheese.

Fresh, organic vegetables and herbs grown in Dermot Carey’s organic vegetable farm in Arsdcull in Co. Kildare are stocked as well as freshly baked bread and pastries. Doyle’s Grocers stocks Irish stoneground flour and porridge made by Ballymore Organics, grown and milled by James Kelly at his old stone mill outside the village of Ballymore Eustace.

In true Doyle family butcher’s style,  the store also stocks venison steaks, cured meats, speciality sausages and black pudding such as Inch House Pudding, hand made by Máirín Byrne from Co. Tipperary. The pudding is made from an old family recipe passed down through Máirín’s family for generations. 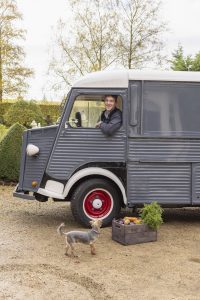 Dominic Doyle says: “Our grandfather, Dominic Senior who I am named after was a stalwart of industry and had the foresight to open what was Ireland’s first ever delicatessen in Ireland in 1963. Even back then, he could see that people wanted in season, fresh food, not mass-produced products but speciality meats, ethically farmed and produced by local people.

“The farm to fork ethos that our grandfather had then is just as important now. People want to know where their food comes from – food provenance is vital. When people buy locally, they cut down on travel, they support small producers and they get great tasting, premium food that can’t be found in supermarkets.

“My brother Conor and I can see a big shift in the choices people make when it comes to food, and we are delighted to be able to showcase some of the most incredible artisan produce made here in Kildare and in Ireland.”

Doyle’s Grocers is located in the Square, Ballymore Eustace, Co. Kildare and is open from Tuesday to Friday from 8am to 5pm and from 9am to 5pm on Saturdays and Sundays. The shop offers a range of beautiful Christmas hampers and can also make up hampers to order.