The Drive Thru Revolution on the Forecourt

Covid-19 helped fuel the rise of a food concept that has long been a ubiquitous feature in the US, but what next for drive-thrus and can they continue to thrive when the pandemic subsides.

Trailblazing the forecourt drive-thru experience in Ireland is Maxol via partnerships with global brand Burger King and coffee company Insomnia. Maxol recently invested three million euro at Maxol Newbridge which saw the Kildare service station transformed with an extensive upgrade to the forecourt as well as the company’s first drive-thru – with further Burger King’s on the menu. 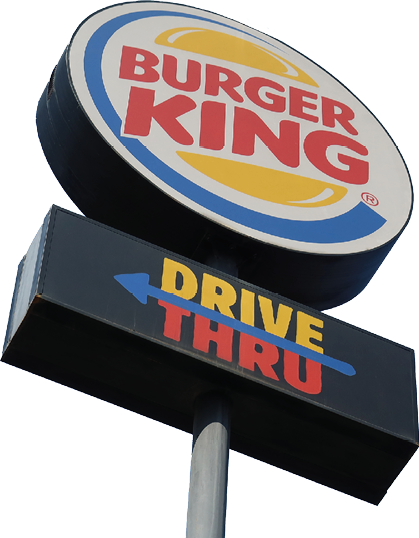 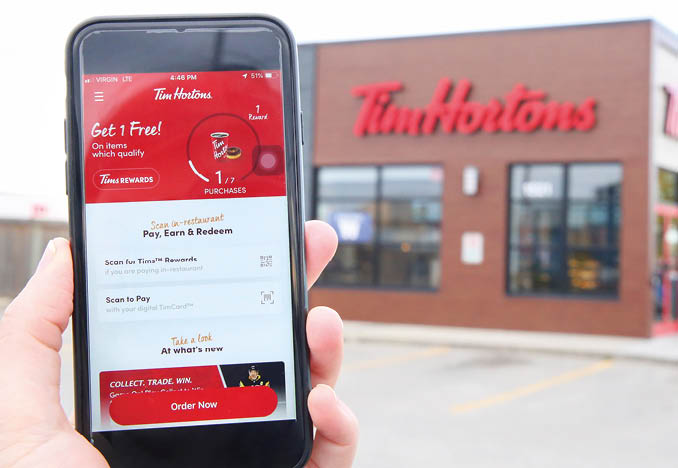 In January last year coffee and donuts chain Tim Hortons submitted an application for a drive-thru café in Portdown and while doing so laid out its future plans for expansion in Northern Ireland.

These included opening at least 25 drive-thrus in a two-year period – proof not only of the Canadian firm’s ambitions but also the growing trend for ordering food and drinks from our cars.

Much of that has been put down to the coronavirus pandemic, with people spending more time in their cars than on public transport, with an added sense of security when ordering from behind the wheel.

It’s hard to estimate the pandemic’s monumental impact on the hospitality industry but perhaps the biggest, and longest lasting, could be the rise of this North American import.

The first such UK venture was opened in the 1980s by McDonald’s (who else?) in Manchester, and while slow to catch on the concept has now become a staple for the biggest fast food players in Northern Ireland, with McDonald’s, KFC and Burger King boasting around 60 such branches between them.

There is still though room for expansion, as statistics show that in the States about 57% of customers at hamburger joints use the drive-thru window, with 65% of McDonald’s sales from drive-thru custom.

And as Tim Hortons has shown, it’s not just burger joints and fried chicken outlets powering the drive-thru revolution – what better way to grab your morning or lunchtime caffeine fix than from the comfort of your car while en route to the office. 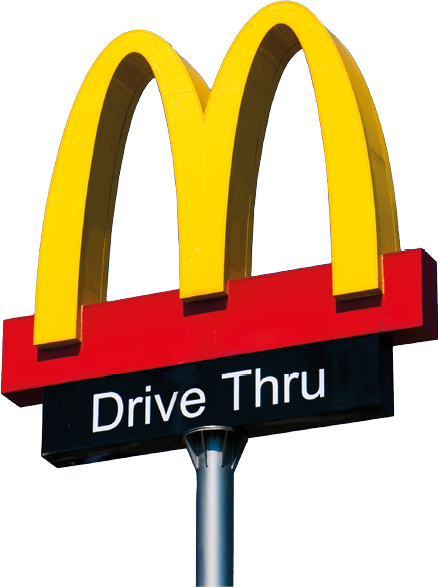 Starbucks opened its largest Northern Ireland drive-thru at The Junction in Antrim in December 2019, creating  25 jobs at a unit that can also sit 110 people – great timing as it turned out with a pandemic round the corner.

And the coffee giant is putting its money where its latte is when it comes to tailoring its business for the commuting customer. As it stands, only 35% of Starbucks stores have a drive-through option, but the plan is to grow that number to 45% by 2023.

There are currently around 20 Starbucks outlets in Northern Ireland, including concessions at a airports and other locations and Ciaran and Colm Butler, who hold the island of Ireland franchise for the Seattle-based coffee giant, hope to open another drive-thru at Hillside Retail Park on Belfast’s Crumlin Road.

In truth, the drive-thru revolution was well under way before Covid hit but it was given a major shot of adrenaline by lockdown.

There are now around 2,500 drive-thrus across the UK and fast-food chains are expected to open around 200 new locations before the end of the year.

According to the real estate consultancy P-Three, demand for drive-suitable sites jumped 25% since Covid hit, while market researcher NPD revealed that visits to existing sites in the year to April 2021 were up by 40 million. 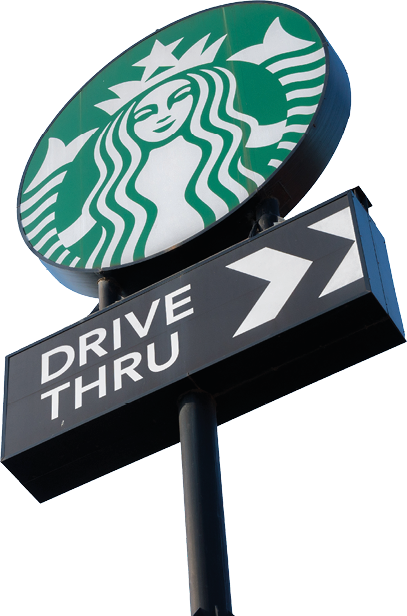 With the high street in decline, operators are also increasingly looking to suburban and out-of-town drive-thru sites. According to This Is Money, chains are now  in a ‘bunfight’ for new locations, with sites selling for £200,000 a pop.

That property push has been driven by customers embracing drive-thru consumption like never before as the latest data bears out.

Global information company The NPD Group found that from September to November 2020 there were 121 million visits to Britain’s 2,000 quick service restaurants (QSR) that offer drive-thru.

That’s a 14% increase on the same period last year, with spend up 45% to £723m over this time frame, a trend the analysts put down to consumers switching from eating in and takeaway options during lockdown

Tim Hortons, which was first brought to the UK in 2017, has drive-thru offerings at half its 30-plus sites and the chains’ chief commercial officer in the UK, Kevin Hydes, said they were doing particularly well.

He explained: “Despite challenging times for the sector, our drive-thru and flagship locations have delivered exceptional performance and our model is proving to be well attuned to the evolving needs of customers at this time.

“We’ve seen significant growth in drive-through lanes, and as restrictions have eased, that growth has remained.”

And he gives short shrift to those who claim the drive-thru trend poses an existential risk of heightening the obesity crisis, pointing out the majority of Tim Hortons sites are within walking distance of a residential community, have good public transport links, and encourage cycling with cycle storage on site.

Another unexpected lift for the sector has come from our changing shopping habits, with the Office for National Statistics revealing that online shopping accounted for a record 36% of all retail sales during November last year – the result being more delivery vans on the roads, all potentially using drive-thru services.

And more QSR chains are opening drive-thrus every day including Subway, Taco Bell and Krispy Kreme.

Among those joining the revolution in the months ahead are two huge American chains in the shape of fried chicken chain Popeyes and home of the square burger patty Wendy’s.

Wendy’s, which reported in March 2020 that drive-thru sales accounted for 90% of its US business as lockdowns bit, is returning to the UK after 20 years, hoping to steal a slice of a marketplace dominated by McDonald’s and Burger King.

In May it unveiled plans to open up to 400 outlets, creating at least 12,000 jobs – with drive thru certain to figure largely in its plans.

And the hope is that UK expansion will be a springboard for growth in the rest of Europe.

A statement said: “The UK launch will spearhead a European-wide expansion as Wendy’s looks to build on strong growth on the other side of the Atlantic, where the brand last year dethroned Burger King to become the No 2 player in the US hamburger market.”

In March Popeyes announced plans to open 350 restaurants in the UK in the next decade, with Northern Ireland a likely venue for many outlets.

The US chain, which plans to launch its first UK restaurant by the end of this year, already runs 3,400 restaurants globally – with drive-thru a major part of their business model.

David Shear, international president of Restaurants Brands International, which is also behind Tim Horton’s and Burger King said: “Our UK launch will build on other successful international expansions in Spain, Switzerland, China, the Philippines and most recently in Sri Lanka.

“We are confident that our UK guests will love their fried chicken from Popeyes and we look forward to offering an alternative product in a major international market that we believe is ripe for disruption. We can’t wait to get started!”

The rise of the drive-thru is good news for operators, too, as average spend per head tends to be higher than at dine-in branches and fewer staff are required. But the figures show that there is still a way to go before matching the US love affair with the model. 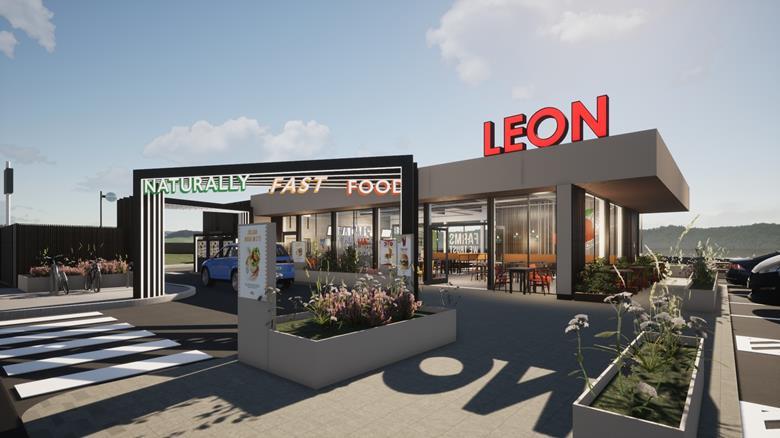 Compare that however with the States, where drive-thru sales during the same period accounted for 42% of all QSR business and 38% of total spend.

While drive-thrus may never be as ubiquitous as they are Stateside, it’s clear many more are going to be added to the mix on this side of the Atlantic, with properties for such ventures usually cheaper to buy and easier to gain planning permission for.

Covid may have fuelled the rise of drive-thrus but even when the pandemic subsides it certainly won’t be the end of the road for this particular food revolution.