Government should set up a State agency with specific responsibility to grow and develop SMEs says a new Economic Report from the Local Jobs Alliance.

The Alliance is an umbrella group of seven leading trade organisations whose members make up 24,850 businesses who employ 448,000 people throughout Ireland. The organisations are representative of SME businesses operating in every town, village and community across a range of sectors

Prepared by economist Jim Power the report says that the new State body should be established now to drive and support SMEs to reboot the economy. Power recognises that SMEs will become an engine to drive urban and rural regeneration; build social capital; deliver a circular economy; and contribute to much of the social cohesion and community endeavour so evident since the COVID-19 outbreak hit Ireland.

The report points out that the IDA and Enterprise Ireland fulfil an important role in achieving their objectives for FDI companies and Irish companies offering services abroad, but there is no such agency for SMEs primarily servicing the Irish market.

Tara Buckley, Director General of RGDATA a member organisation of the Local Jobs Alliance said: “The one thing SMEs have in common is that they provide local employment in the cities, towns and villages throughout the country, they represent the lifeblood of regional economic activity. They receive no support from agencies of the State and get very little recognition in official policy making. This is in marked contrast to the FDI component of the economy.” 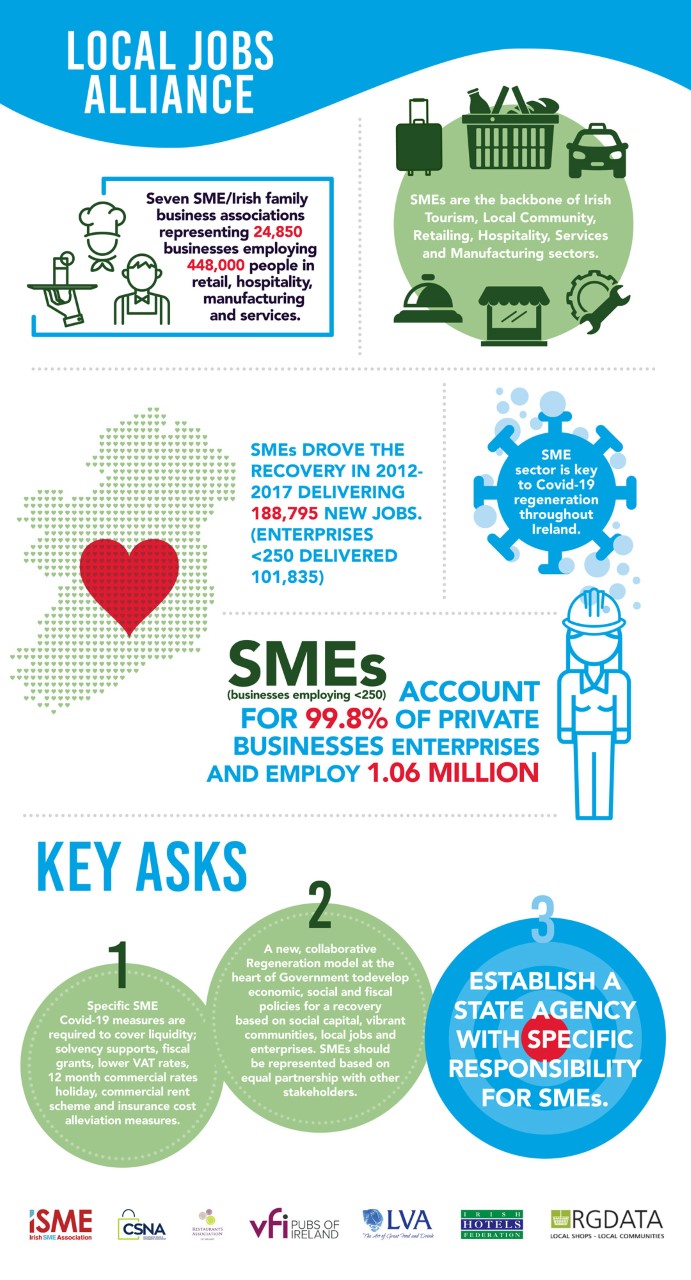 The Local Jobs Alliance report also states that  a range of measures are now necessary to ensure that as many small businesses as possible survive the shock posed by COVID-19 as they will have to play an essential role in re-building the Irish economy as the virus passes and the economy is re-opened.

Businesses involved in the Local Jobs Alliance span retail, hospitality and many other areas of SME activity. Many of these businesses are now shut down as a result of COVID-19, while others are playing a vital role in supporting the economy and society during these difficult times.

He also said “The agenda of an incoming government must include measures  to nurture, support and grow the SME sector, which makes such a strong regional and national economic contribution, and which will play an essential role in re-building the economy.”