The next Freshii will open in Callender Street, a short distance from their Donegal Square West outlet.

NI will soon see a third store in The Quays Shopping Centre, Newry during the summer.

Freshii is one of the fastest-growing restaurant brands in the world, serving a healthy and customisable menu built around high-quality fresh ingredients.

Freshii meal choices are based on fibre-rich, slow-burning carbs, essential fats and lean proteins and features over 70 ingredients and homemade salad dressings made fresh daily. 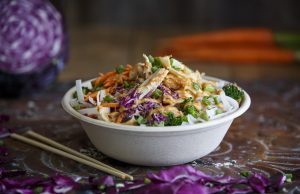 It also caters for every dietary and taste-bud preference including paleo, vegetarian, vegan, gluten free, dairy free and wheat free.

Speaking ahead of the launch, Dave O’Donoghue said: “Freshii’s core mission is to help people live healthier and better lives by making nutritious food convenient and affordable and the reaction in Ireland has been phenomenal so far.

“We are really excited about growing the Freshii brand in Northern Ireland – we are investing and creating over 100 jobs while satisfying consumer demand for healthy food.”

Further Irish outlets are to open throughout 2017.