Heroes or Villains? Fuels for Ireland on being part of the solution

It’s not all about ‘big bad oil’ says Fuels for Ireland’s Kevin McPartlan.

“It’s about transition. It’s about having essential conversations with government, and it’s about what’s just and fair.”

Ireland’s target to become carbon neutral by 2050 is a mammoth task that asks a great deal from both society and the fuel industry.

IFCR talks to Fuels for Ireland CEO Kevin McPartlan about how the Irish fuel industry can ‘walk the talk’ hand in hand with government, wider society, the business community and the oil industry – to be a core, integral partner in helping the country make its commitment to become carbon neutral by 2050 reality.

When Kevin McPartlan took up the reigns as CEO of the organisation previously known as the Irish Petroleum Industry Association (IPIA)– now fully re-branded as Fuels for Ireland, he was the first full time, employed official in 30 years.

“The Association had existed for almost thirty years and had done some great work one health and safety, issues around excise and duty etc, but had not really engaged on the critical issues around climate change and the absolutely necessity to reduce – ultimately to net zero, carbon emissions. Members recognised that the sector had no effective voice in policy discussions and so the critical role that they could play in powering Ireland through its energy transition and beyond was not being considered by key stakeholders. The Members decided to “level-up” and hire a public affairs specialist to lead the organisation and advocate for the sector and its consumers When I took up post, I recall one of the council members telling me about the ‘demonisation’ of the sector, and that we need to let people know all we have done, are doing and can do to eliminate greenhouse gas emissions so that we still have a role in meeting Ireland’s energy needs beyond 2050.

Forecourts are just part of the overall picture – but Fuels for Ireland’s members are steeped in making sure that Ireland has the fuel it needs to function – whether that’s home heating oil, or powering essential services such as hospitals and schools, or aviation and transport – keeping Ireland on the move. Fuels for Ireland’s members know that their forecourt partners, their dealers and site operators, are busy running their own businesses day to day and need someone to advocate on their behalf.

“Understandably, they are concerned about their own routine issues and challenges – daily staffing rotas, and whether there’s enough soft drinks in the cabinet. Yet in their quiet moments, they may stop and think – ‘what does all this talk of carbon neutral by 2050 mean for me and my business, and for the people who rely on me?’

“It may not be at the forefront of their minds on a daily basis, but they are smart people. They are asking themselves what role their businesses will play in keeping Ireland moving in a carbon neutral future. Will they need to install banks of ultra-fast EV chargers, provide green hydrogen for fuelcell electric vehicles or dispense bio-diesel? Will they still be selling today’s petroleum products at all? ?

“The businesses supplied by Fuel for Ireland’s members, not to mention their consumers – need to know that there is someone, somewhere watching their backs and representing their interests. They need reassurances that we are committed to real change.”

“Currently, 50% of the total energy consumed in Ireland is fuelled by oil and nobody could credibly argue that this can be allowed to continue. We also need to recognise the uses that this fuel is being put to – it’s getting people to work, bringing produce to supermarkets, allowing grandparents to visit their grandchildren, transporting Covid-19 vaccines to patients and allowing Irish businesses reach export markets. If we were to simply stop selling petroleum products at noon tomorrow, Irish society and our economy would be in chaos before the Six-One news began.

So it’s absurd to suggest we simply stop using petroleum fuels immediately, but it is equally absurd to think that we should continue to use them at current rates in the years to come.

“Fuels for Ireland’s members are Emo, Greenergy (Amber and Inver), Irving, LCC Group (Go), Top, Circle K, Maxol, Valero (Texaco), applegreen and Corrib Oil. We have Irish family owned companies which have been in business for over one hundred years, as well as major multinationals.

“And those companies are led by gifted, entrepreneurial, creative people. They recognise that their long-term business strategies cannot be based on selling kerosene, diesel and petrol so there is a commercial as well as a moral imperative (and let’s not beat around the bush, there is a moral imperative for the fuels industry to play a full and active role in addressing the carbon emergency) to change the products and services we bring to market. They not only want to address the urgent need to innovate, but have the capacity to deliver real results.

“The potential is phenomenal. A lot of policy makers and regulators just think  of us as ‘big bad oil’ and don’t see the bigger picture. They don’t recognise that we are way ahead of the game in terms of providing EV charging on forecourts, that we already bring more renewable energy to the Irish market than any other sector.  By excluding us from the policy discussions, they risk missing out on the further positive impact we can make.

“There are billions of dollars being invested every year into research and development around advanced, synthetic and bio fuels, for example. There is already a sustainable aviation fuel on the global market which cuts emissions by 80%. Here in Ireland major fuel users can opt for transport fuel with 30% waste-based biodiesel to  reduce carbon.

A seat at the table

“We are saying to government – let us in and talk to us – there is no point in treating us like the bogeyman. If we are part of the problem then we are also part of the solution. Too many see it as a polarised debate – a case of ‘goodies and baddies’” said Kevin.

Government seems to be placing all its eggs in one basket. It is relying on electric vehicles to decarbonise transport but if the Government meets its target of one million EVs on the road by 2030 (and that is very challenging), the majority of cars will still be using petroleum.  If the impact of the internal combustion engine vehicles which remain on the road is to be reduced, Government really needs to work with the people who provide the fuel which will drive them.

“There will be fuels on the market in ten years time that haven’t even been invented yet. EVs are not the only solution We need to embrace the  enormous potential of advanced synthetic and bio fuels.

The Government plans to reduce emissions from transport seems to ignore great swathes of Irish people. Investing in public and active transport may enable behavioural change among residents of suburban Cork, Galway or Dublin, but has little impact on those who live in rural Ireland and have no option but to rely on their private cars. The simple fact that consumers have not (yet) made a wholesale switch to EVs so if we are to reduce greenhouse gas emissions from transport we need to change the products which fuel internal combustion engines – even if only as a transitionary measure.

We have called on Minister Eamon Ryan to double the biofuel element of petrol sold in Ireland by mandating the introduction of E10 but still have no clarity on when this policy, which will eliminate 90,000 tonnes of carbon emissions each year, will be implemented.

When Kevin McPartlan took up the new post in September 2019 he knew he was up for the challenge.

“We recognised we needed to make a clear break from the past – even the name ‘Irish Petroleum Industry Association’ was holding us back and didn’t really reflect the reality. We are not in the oil business. We are in the energy business – fueling Irish people, families, businesses and communities -whether the fuel is carbon based, derived from waste, algae, renewable electricity or anything else.

“Last year we rebranded to Fuels for Ireland’s and our  vision document ‘Powering Today and Tomorrow gives our overarching strategy. It is based on a firm commitment to play a full role in achieving carbon neutrality and baldly states that fossil fuels cannot be the basis of our future business plans.  We are following that up with policy documents on individual sectors.“In the next few weeks we will be publishing  our report on EV charging on Irish forecourts and hope to present it  to the Oireachtas Committee for Climate Change.

It will show that Irish forecourt operators are ahead of the curve in terms of providing ultra-fast EV charging but will also discuss some of the challenges we face in further growing that network.

“For example, forecourt operators will want to know about installing efficient EV charge points – but can the ESB infrastructure cope? And what about the costs incurred by service station operators?

“Investment of hundreds of thousands of euros can be required by the forecourt operator – but it’s the ESB that takes the energy saving credits. The people who make the investment should surely be those who are recognised as delivering the impact.

“EV charging is not just needed on the motorway networks. Those who have no off-street parking will need to rely on public charging facilities – like those on forecourts, and yet it is often in urban and suburban areas where home charging for EVs is most challenging, that the electricity infrastructure is least able to cope with the ultra-fast units that would be required by fuel stations  to efficiently offer charging to local EV owners.

While Minister Ryan, his advisors, senior officials and the Department for Climate Change are the major stakeholders for Fuels for Ireland, the organisation is engaging with a range of regulatory bodies, health and safety authorities, the Department of Transport, and other Oireachtas committees, as well as its UK counterparts such as UKPIA, the PRA and UKIFDA, plus relevant organisations such as SIMI in Ireland and FuelsEurpoe in Brussels. It is also speaking up on behalf of the fuels industry in the media to highlight the contribution it can make to tackling the climate emergency and to protect its consumers from inequitable policies.

“Everything we do” said Kevin, “is designed to demonstrate to Government and other stakeholders that we have a role to play in powering Ireland today and tomorrow. That during our transition to carbon neutrality, and beyond, we will continue to deliver the energy on which Ireland depends.

“We need to ensure Irish family, business, social and cultural life can continue so we need to explore every option to so we all have realistic routes to carbon neutrality by 2050.” 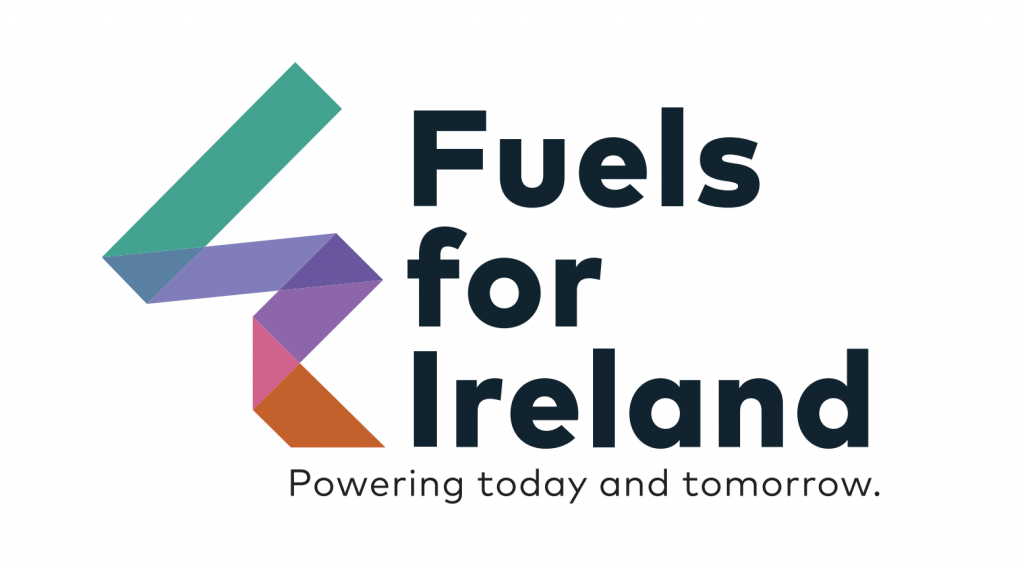