Last year, Circle K acquired 10 High Street stores in its first move away from the forecourt in Ireland – and it doesn’t look like it will be the last.

In a forthcoming interview with IFCR, Senior Director of Retail Operations for Dealer & Franchise Derek Nolan says the company sees great potential in High Street locations and is on the lookout for more.

In September 2021, Circle K acquired 10 Griffin Group convenience stores across Dublin, most of which were in coveted city centre locations, an unexpected step onto the High Street for the forecourt giant which is well known globally for its fuel and convenience stores. 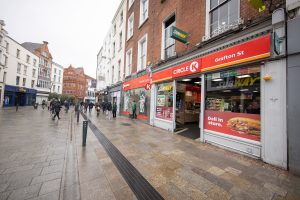 “This marked our first move onto the High Street where we were selling food and not selling fuel. We see great potential for our offering in these locations,” Derek Nolan told IFCR.

However, he insists the company is in no danger of forgetting its roots, despite its continued interest in the High Street.

“This is an important and exciting development with Circle K, but it’s important to note that we remain hugely committed to fuel retailing and our network of service stations throughout the island of Ireland,” he said.

Derek’s own area of the business – the dealer and franchise network – is growing quickly, with 243 sites across the island of Ireland where he works directly with independent retail partners.

“We’ve brought 15 new sites to the dealer network over the last 15 months. Our dealer partners look to the Circle K model as to what the future is going to look like, and an example of that would be around electrification and fuel quality,” Derek says.

“We have more than 14,000 stations globally and that gives us a good sound basis of understanding of the current market and what the future looks like.”

To read the full interview, watch out for the forthcoming issue of IFCR.